The voice assistant in your phone is helpful—sometimes. Every now and then, she can locate the nearest gas station, and sometimes she can even tell you a joke. But when it comes to full-solution artificial intelligence, she just doesn’t make the cut. Unfortunately for many consumers, when they hear the words “voice assistant,” they imagine just that: a solution for the deluge of data, appointments, and interests that they have to revisit day in and day out.

Always at the ready with pools of information and the tools Ironman needs before he even knows he needs them, JARVIS is the end goal of many voice assistant developments.

“I want it to basically run the entire house, literally,” Nagaraju said. “And I want it to have information for me at my fingertips. If I am using a voice assistant at work, I'm in a meeting, and I want to pull up a spreadsheet or I want to run some numbers, I want to be able to say, ‘Hey, how were the sales for last week, and how did they do compared to last year at this time?’ And I want it to compute everything and give it to me right there.”

Voice assistants are obviously not at this level quite yet, but Nagaraju’s dream assistant isn’t too far off of what others want and expect from voice assistants down the road. With powerful, efficient memory, smart devices everywhere will be able to do nearly everything JARVIS can do and really save their owners the time they so often run out of.

The Appeal of Voice Assistants

Voice assistants made their debut, for most users anyway, on cellphones. With a quick press of a button, a spritely female voice was ready for, well, mostly voice-activated web searches or placing calls. Despite its shortcomings, many people were overjoyed by the prospect of their new assistant.

“They see this trend where your voice becomes a new interface, where it gives you a hands-free experience and takes you away from the screen,” Nagaraju said. “So I think that’s why most people were so excited about these voice assistants.”

As these assistants became more and more helpful—and as more and more Internet of Things (IoT) devices made their way onto the market—developers wanted to bring similar intelligence into the home, where consumers could access that hands-free user interface in their house and with their family.

“The speaker was just an entry point into the house—because it was cheap,” Nagaraju said. “But what the speaker did was bring that same interaction from your mobile device to a device that just sits in the home."

“It's more communal now. It's not you having a relationship with your phone. It's more about anybody in the house talking to a device and getting general solutions or answers to questions. So that was the paradigm shift.”
Harsha Nagaraju
Senior Consumer Segment Marketing Manager, Micron Technology

The communal goal of these devices is to save users time, making their lives more efficient, and getting the mundanity of their lives out of the way. But, while is the promise that most voice assistants pledge to their users, as they stand now, even as they make their way into washing machines, refrigerators, and more, Nagaraju believes they have a long way to go before they begin fulfilling that promise, both in social acceptance and hardware capability. 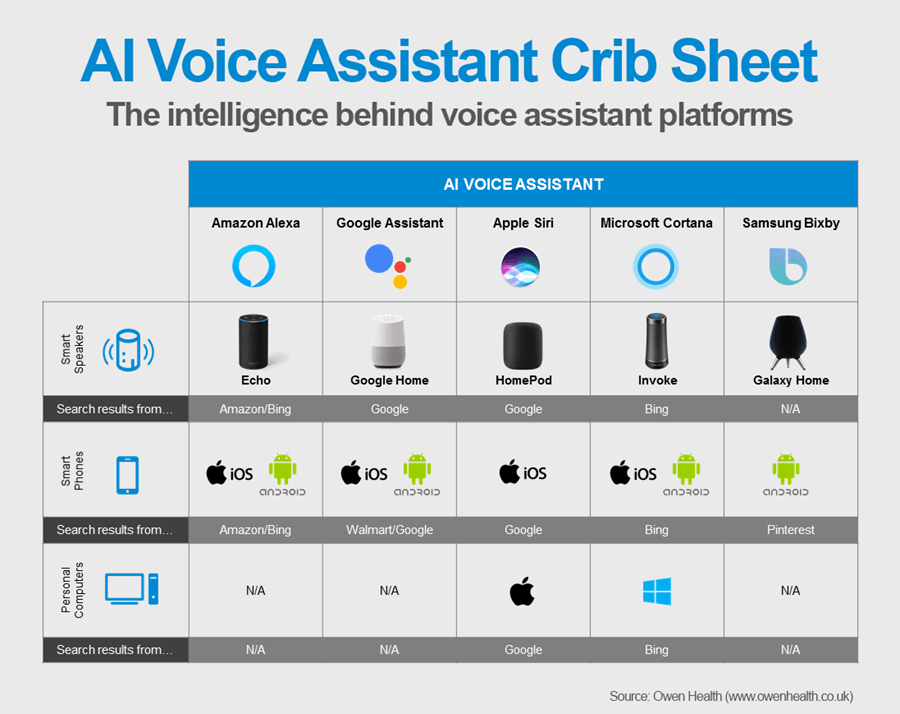 Voice assistants are a big deal for most families. Just imagine inviting a stranger into your home, a stranger who writes down everything you, your spouse, and your children say and keeps a list of the media you interact with on a daily basis. For some people, voice assistants are this stranger, a frightening security risk that they’re incredibly slow to allow into their lives.

Nagaraju says, for the most part, this is not as big of an issue as most people make it out to be. There are multiple security measures in place for smart-device voice assistants, including on-device memory. Most information gathered by the assistant is stored on the device and not shared with the cloud. So, when a user asks their assistant a question or gives it a request, that information is not ported to the cloud, and, Nagaraju says, no one is hacking it.

In addition, these voice assistants can create voice profiles for individuals in the home, adding another level of security for users’ data.

However, some data does have to be processed in and ported to the cloud, specifically when you are interacting with an account on another site, including ecommerce websites.

“The information that you are giving away, maybe when they're buying things, is actually public information,” Nagaraju said. “Understand it's going into the cloud, it's sitting above the cloud, and it is subject to hacking and things like that.”

So how can these instances where hacking is an option be avoided? Better hardware. Micron is currently developing Authenta technology, an encrypted RN chip that can signal to a network that a particular device is legitimate and trustworthy. If it finds that the device is being compromised, it can kick that device off the network. Nagaraju says it’s an optimal way to establish end-to-end encryption, “all the way from the device at home, to the cloud, and back to the device.”

Such security measures and innovations could bolster the legitimacy of voice assistants, further pushing them toward the JARVIS levels of usefulness and efficiency that Nagaraju wants from his own smart devices. With ease of mind comes better social acceptance, and with more social acceptance comes a greater emphasis on hardware evolution, which these smart devices and the artificial cloud computing devices are in desperate need of.

Are Voice Assistants All That Powerful?

Most consumers buy their voice assistants expecting an all-in-one solution, capable of taking in contextual clues to really get at the underlying request in every command they receive. And while they’re revolutionizing the smart device industry and making their way into everything from refrigerators to car dashboards, there’s always room for growth.

“It's been promised to everybody that, eventually, the assistant will really understand who you are and give you solutions at the right time, at the right place, and the way that you like best,” Nagaraju said.

But, as we’ve already established, voice assistants haven’t reached their peak JARVIS level yet. They’re absolutely useful in their own right though—who doesn’t love being able to order new boxes of popcorn and other snacks just after finishing the last bag? These devices let users move their shopping and much of their entertainment to a voice user interface, saving them valuable time and giving them a chance to play whatever song comes to mind within seconds.

But, with automated schedule shifting and other more advanced functions in mind, the technology has quite a way to go. According to Nagaraju, a singular smart speaker is relatively simple by design, which means most of the computing and artificial intelligence processing happens in the cloud. It’s just not at the level that most people expect when they envision their idealized voice assistant.

“People think of it as, ‘Hey, here's my assistant, and I'll go buy it for 30 bucks,’” Nagaraju said. “But it is really not doing everything for everybody yet. It might get there. It will take a few more years, but, today, there's very limited usage.”

As seen in a 2016 All About Circuits teardown, devices like the Amazon Echo contain Micron memory, which aids the internal processor of the device, but the real innovation required to reach higher computational levels requires a hybrid of better on-device memory and better hyper scaler cloud memory , much of which Micron is spearheading within the industry.

Once such innovation is what Nagaraju describes as a form of packaging customization, where engineers compile two types of technology within a device to help it with power consumption. This, in turn, helps make the device smaller, warranting more and more smart devices that can connect to the powerful AI cloud that Micron memory is powering.

With this new technology, the voice assistant programs of the future are not far off.

“In the next couple of years, one, they'll have more data, and two, the algorithms will start to understand context,” Nagaraju said.

“It knows your calendar, it knows your reservations, and it knows if you're going to be late to a meeting. It's going to preempt those things and give you suggestions even before you ask, like a new meeting time slot or a faster traffic route.”

Ultimately, these voice assistants will reach their prime when they start to give people their time back, and that’s exactly what many hopeful consumers yearn for when they scoop up their new smart speaker or start using their phone’s voice assistant capabilities.

With Micron memory already in these devices, there’s nowhere to go but up. As Micron increases their memory capabilities, so too will they increase voice assistant capabilities. Nagaraju might have his JARVIS assistant sooner rather than later.