Artificial intelligence will revolutionize our technologies and transform our lives—enabled by innovations and advances in memory.

That was the message at Micron’s Insight ’18 conference held Oct. 10 in the airy, modern Pier 27 building with stunning views of the iconic Golden Gate Bridge. While sailboats and ferries traversed the sunlit San Francisco Bay outside, more than 350 guests joined hundreds of Micron employees to network over catered wraps, sandwiches, and salads—and, after the on-stage presentations, adult beverages and hors d’oeuvres—and to learn about the possibilities for AI in life, business, and health, enabled by Micron memory.

Micron CEO and President Sanjay Mehrotra kicked off the conference with an overview of the talks to come, highlighting the critical role that Micron’s memory technologies play in artificial intelligence’s ability to “turn information into insight, and insight to intelligence.”

Memory and storage, Mehrotra said, enable AI to analyze and act on data in real time.

“The CPU is the brain,” he said, “and memory and storage are the heart needed to realize the full potential of AI.” 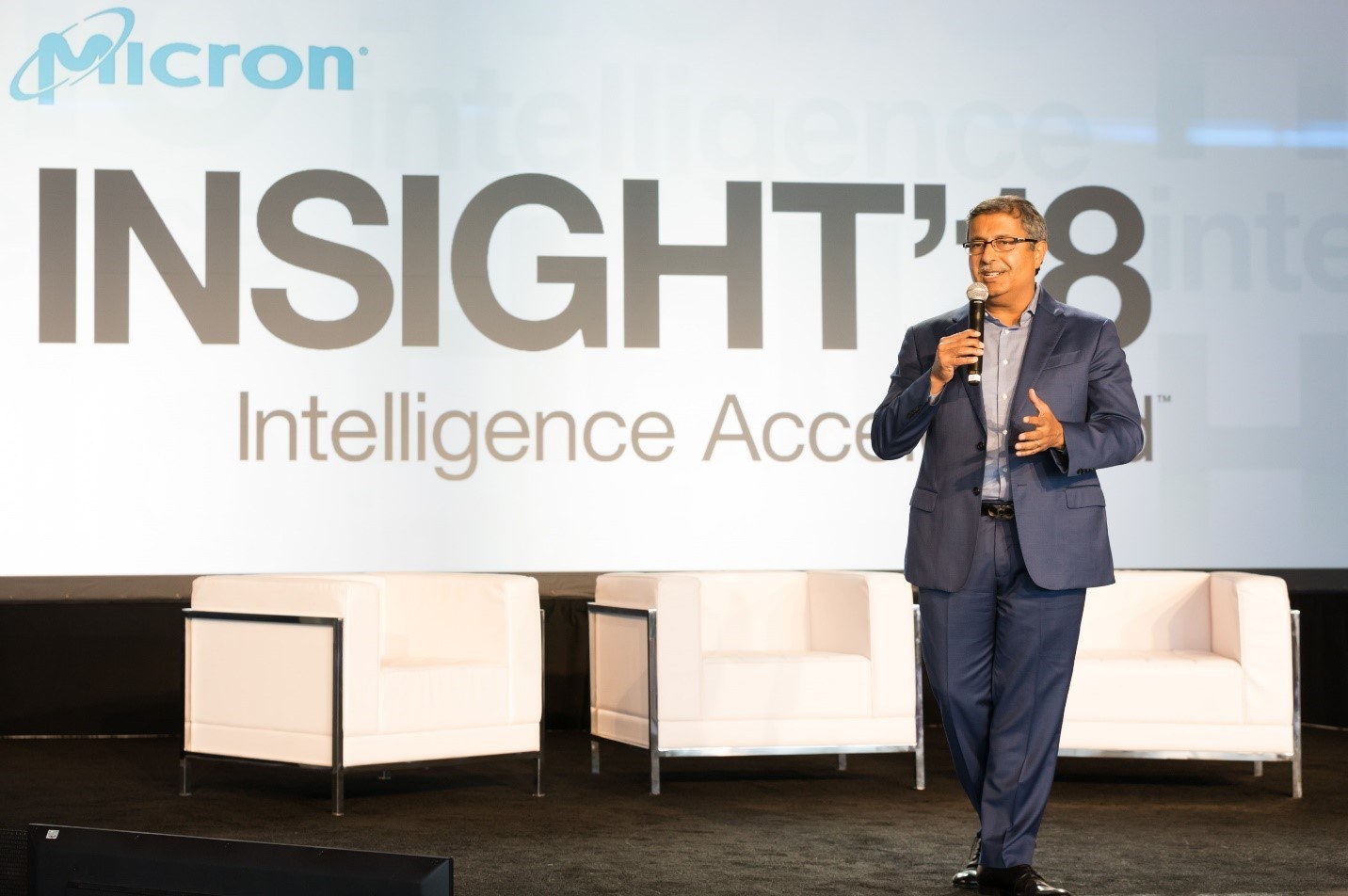 To achieve these objectives, Amazon is introducing such features as Whisper Mode, in which Alexa’s speaking style mirrors that of the user; “Multimodal,” which lets the user interact simultaneously with Alexa and the screens on other devices; “device context,” in which has Alexa knows which device you want her to start your movie on (hint: it’s the one nearest you when you make your command), and personalized features such as speaker ID, enabling Alexa to discern among users and adjust preferences accordingly.

Soon Alexa may act as a true personal assistant, Nataranjan said, reminding users where they left their car keys and helping them to decide where to go on vacation and what to make for dinner. True autonomy is the goal, he said; Artificial General Intelligence, with Alexa, for instance, able to perform any intellectual task that human can do, is the ultimate “holy grail” for AI developers.

“This is like a bicycle race,” Nataranjan said. “We are the very start of the race and it’s going to be a long ride, but it looks like a super exciting ride.” 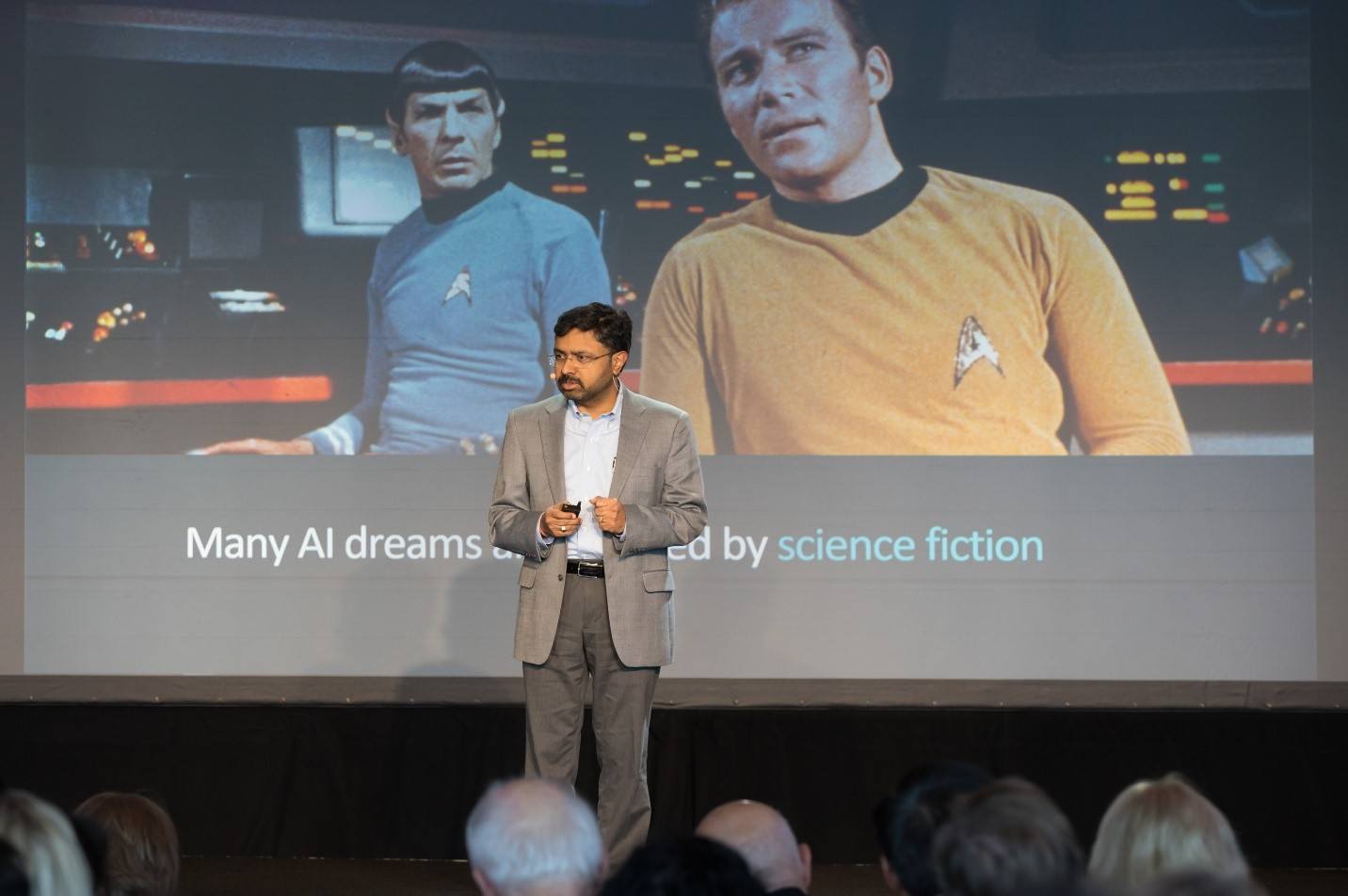 Training chatbots to converse naturally and intelligently is much more complicated than it might seem, however, she said. People don’t talk in a linear fashion, but may switch among topics, interrupt one another, start and stop, ask questions, argue, or just listen. Showing empathy helps the user stay engaged; asking questions can help them better express themselves. Meeting their needs and making their lives better are Microsoft’s goals for the technology, she said.

“If we want to integrate AI into everyday life, we need to learn a lot more about modeling human conversation, and be open to experimenting,” Cheng said. “And we have to think not just about getting tasks done, but about social skills and emotional skills. Because the moment you have a voice, people attach feelings to it.” 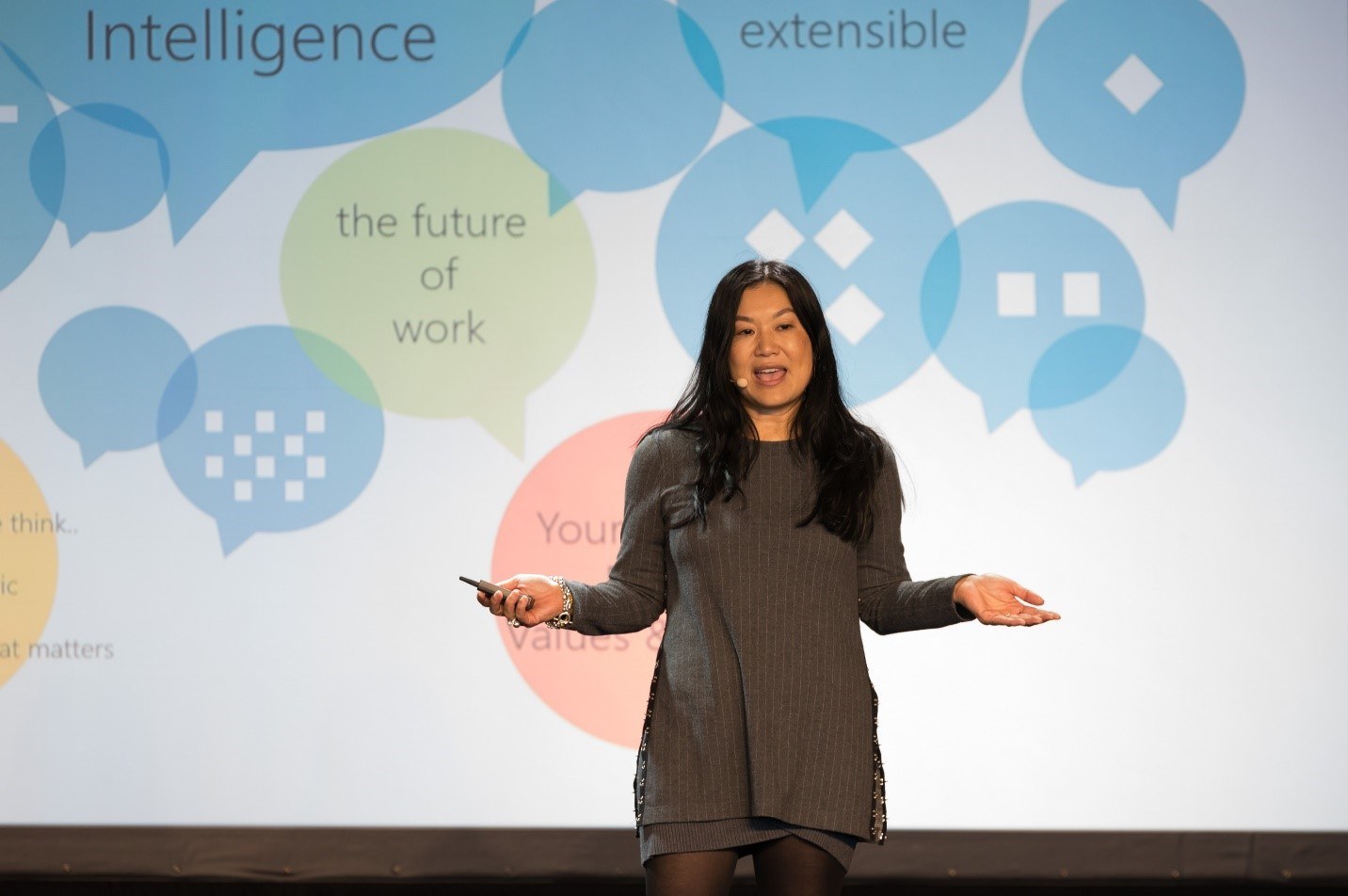 But the “exponential growth” in data we are seeing also comes from within, Sadana pointed out. DNA sequencing, medical histories, studies of the unique bacteria populating each person’s digestive system (the “microbiome”) and more are producing more data than humans could ever process and analyze. Even conventional, CPU-processing computers can’t do it in less than a lifetime. Only AI equipped with fast processing and capacious, accessible memory can find the needle in the proverbial haystack: the answers to the mysteries humans have sought to unlock since the beginning of time. Is there intelligent life in the universe? What causes disease? Can aging be halted (without dying, of course) or even reversed?

As Sadana noted, fast, vast memory is essential for AI to function at all, and especially for sorting massive amounts of unstructured information.

Our bodies have 10 times more microbial cells than human ones, and the microbiome comprises millions of genes. Analyzing and categorizing all this data is essential to finding cures for ALS, cancer and other illnesses—and only AI can do it.

The panel discussion, “AI Opportunities for Consumer & Business,” featuring experts from Qualcomm, NVIDIA, and Verily, noted many of these advances with a focus on artificial intelligence, and suggested a replacement for Moore’s Law: one recognizing that power, performance, and memory are doubling every 18 to 24 months, while technology costs are shrinking.

In other words, the technology will soon be ubiquitous, enabled by vast quantities of data stored and processed using high-density, high-speed memory.

“AI is on the cusp of breaking out,” NVIDIA Vice President Premal Savla said. “We are seeing it in every field.” 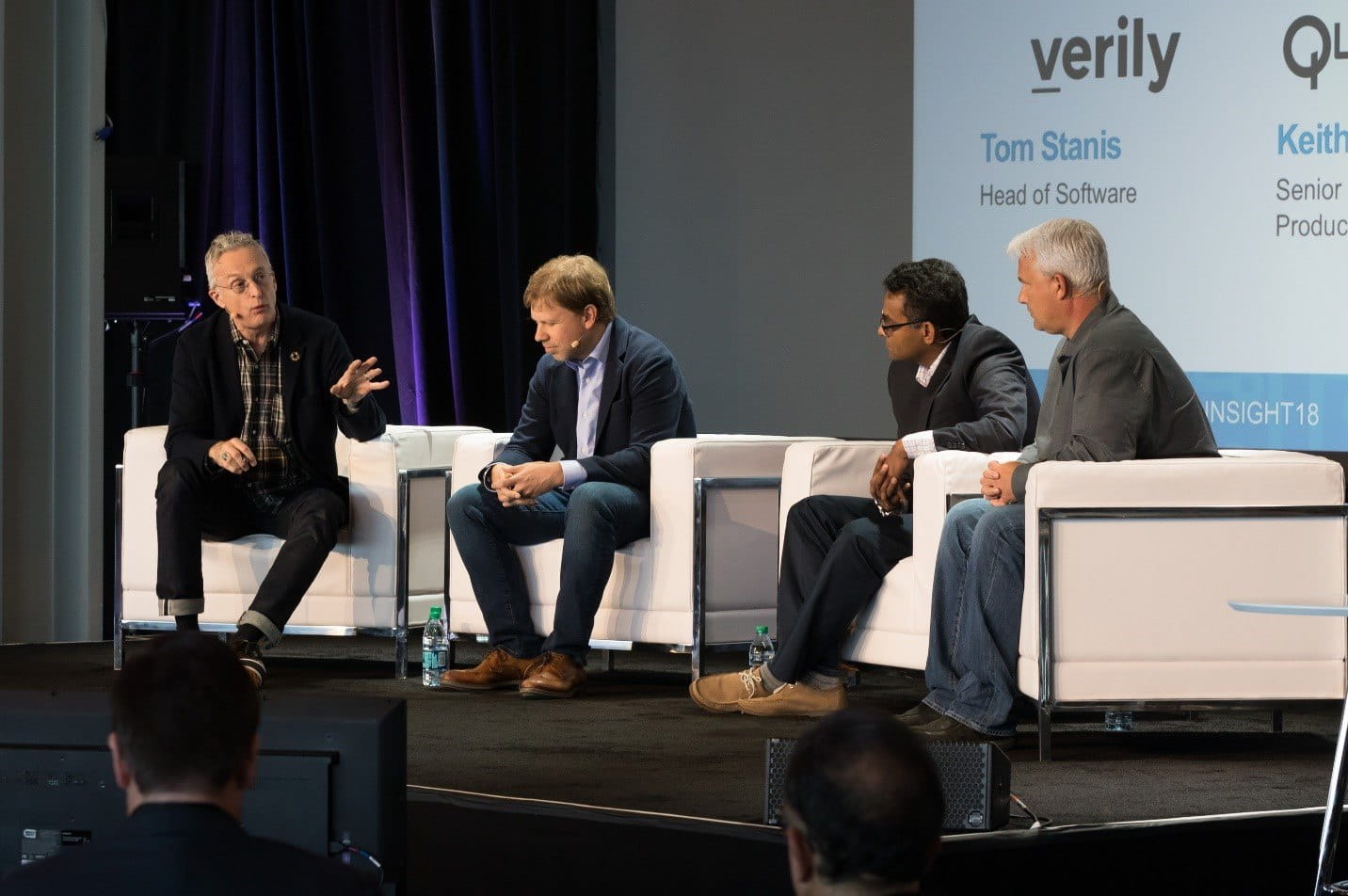 “The processor is the brain,” she said. “Memory is the heart.”

To illustrate, Somerville told a story from her own heart, of her teenage son’s diagnosis with a rare form of cancer. He underwent conventional treatment and is doing well, she said, but as a scientist, her initial response to the diagnosis was to plunge into research. What she read excited her about the future of health care, in particular “precision” or personalized medicine, in which treatments are tailored according to an individual’s biology and other factors, she said.

“As a technologist, I can see how memory matters in the development of personalized medicine,” Somerville said.

AI will accelerate the development of precision treatments; its rapid DNA sequencing will help doctors to classify tumors and develop tailored treatment plans, she said. AI technology also promises to lead to the discovery of new drugs and treatments that are far less invasive, with better outcomes.

Data, she pointed out, is the lifeblood of AI. And Micron memory serves as the technology’s heart, providing the information that fuels artificial intelligence—that keeps it working.

“These huge genetic databases are going to need higher-performance working memory, and higher-capacity storage memory,” Somerville said. “Memory technology will contribute to faster and more accurate diagnoses and treatment with lower costs and better outcomes. We can use memory technology and the power of AI to solve these important health challenges. It makes me proud of what we’re doing at Micron,” she said.

In “AI and Automotive,” Simon Euringer from BMW and Vijay Nadkarni from Visteon provided a sneak peek into how AI technologies will provide truly personalized experiences in our cars, not only tailoring our music and media preferences to individual drivers but allowing us to set parameters for driving style, as well.

“Each of us drives differently every day,” Euringer said. “AI is adaptable to mood, situations, and context,” including weather and traffic conditions, the time of day, and other variables. “It knows whether you like to refuel at the start or end of a trip, which station you like,” and more.

And, the men said, AI is coming to the automotive industry much more rapidly than many realize—as soon as 2021 for Level 4, or “mind off” driving.

“If we bumble into AI unprepared, it will probably be the biggest mistake in human history, resulting in our own extinction,” Tegmark, author of “Life 3.0: Being Human in the Age of Artificial Intelligence,” warned in his keynote address.

“We’d better get it right the first time.”

Although many shrug off Artificial General Intelligence, the vaunted “holy grail” of AI, as unlikely, technology experts agree that it is only a matter of time before our devices are as smart as we are, Tegmark said. “Superintelligence,” the next level, means AI will be designing and improving itself, and advancing much faster than it is today, when mere humans are at the helm.

When our technologies are smarter than we are, then what? Tegmark asked. “What do we want the role of humans to be if machines can do everything better than we can do?”

“Where do we ultimately want to go with artificial intelligence?” Tegmark said, calling this question the “elephant in the room.”

“What sort of society are we hoping to create? Let’s envision an inspiring future, and steer toward it.”

During the conference, Micron announced more than $100 million in funding for AI research and education and promotion of diversity in the AI field.

Micron CEO and President Sanjay Mehrotra wound up the speakers’ portion of the conference with closing remarks and an invitation to all to proceed to the AI “Experience Zone” and after-party.

Are You Experienced? In the Zone

After the talks, the crowd moved downstairs to the Experience Zone, where 18 interactive exhibits invited participants to explore AI and other technologies in farming, medicine, fashion, surveillance, and even pets—while enjoying beverages from the hosted bar and delicious appetizers provided through the evening. The popular exhibits included: 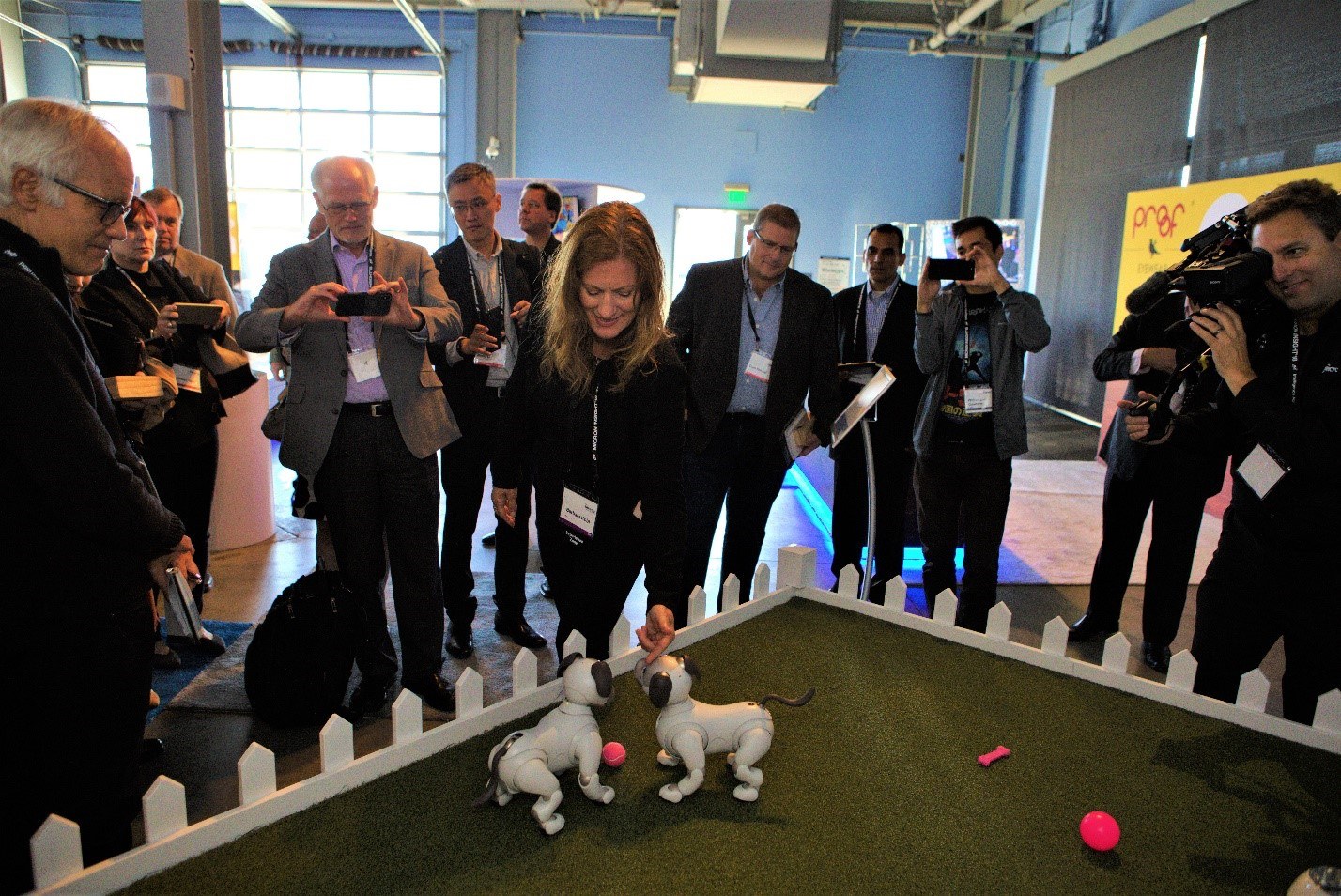 At evening’s end, electronic music and swirling lights energized an already-high-energy crowd, sending them out with inspiration, excitement and ideas for how to create a future that, as Tegmark exhorted, features “AI not that overpowers us, but that empowers us.”

Creating Unique Suggestions for Every User

From how people shop, binge and surf, the cloud is what makes personalized, digital experiences possible. Micron memory and storage innovations provide the powerful technology necessary to make these complex AI processes work for your business.
Read more ›

It takes two to tango, but what about writing or performing a song? Today’s fast, reliable technologies are bringing creatives together in the cloud to make beautiful music — and more.
Read more ›

Will Technology Save the World?

It’s easy to take a doom-and-gloom attitude when considering our planet’s environment, but there may be reason for optimism.
Read more ›
+