What is a “Heterogeneous Memory” Storage Engine (HSE)?

What is a “Heterogeneous Memory” Storage Engine (HSE)?

Why heterogeneous? Micron has an extensive portfolio of DRAM, SCM and SSDs that gives us the insight and expertise to build a storage engine that intelligently manages data placement across disparate memory and storage media types. Unlike traditional storage engines that were written for hard disk drives, HSE was designed from the ground up to exploit the high throughput and low latency of SCM and SSDs.

The HSE durability layer is a user-configurable logical construct that resides on the staging media class. The durability layer provides user-definable data persistence in which the user specifies an upper bound on how many milliseconds of data may be lost in the event of a system failure, like power loss.

Data is initially ingested from DRAM into the durability layer. Storage is allocated from the faster staging media class to meet the low-latency, high-throughput requirements of the durability layer. Unlike a traditional write-ahead log (WAL), this durability layer avoids the “double write problem” common with classic journaling to significantly reduce write amplification.

As stored data ages, the data migrates through multiple layers of the system and is rewritten as part of garbage collection to optimize query performance (completion time). Here’s the high-level process:

As queries are serviced and data is read from both media classes, indexes are page-cached into DRAM. An LRU (least recently used) algorithm dynamically ranks indexes to facilitate index tracking, pinning the hottest (i.e., the most frequently accessed indexes) in memory, assuming system DRAM is available.

Our test setup used one Micron 9300 SSD with NVMe™ as the staging media class device and four Micron 5210 SATA QLC SSDs as the capacity media class devices. We used the Yahoo!® Cloud Serving Benchmark (YCSB) to compare the operations per second and 99.9% tail latencies:

We ran YCSB workloads A, B, C, D and F with the same thread counts for both configurations.1 Table 1 summarizes several YCSB workload mixes, with application examples taken from the YCSB documentation. Tables 2 through 4 share other test details regarding hardware, software and benchmark configurations.

YCSB starts by loading the database. This is a 100% insert workload. Adding a 9300 to the mix reduces the time taken to load the 2TB database by a factor of four.

Figure 1 shows throughput for the load phase and run phase of the five YCSB workloads. For write-intensive workloads like Workload A (50% update) and Workload F (50% inserts), adding a Micron 9300 as a staging media class increases the overall throughput 2.3 and 2.1 times, respectively. Workloads B and D (5% updates/inserts) show more modest improvements in throughput because 95% of these workloads are reads coming almost entirely from the 5210 SSDs comprising the capacity media class. 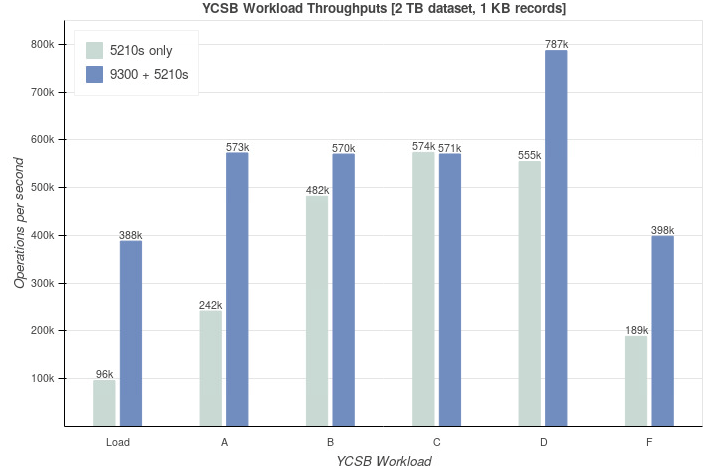 Figure 2 shows the 99.9% read (tail) latencies. The read tail latencies for all workloads are considerably improved (2 to 3 times) after adding the 9300 (except for Workload C, which is 100% reads). Recall that newly arrived writes are first absorbed by the 9300 and gradually written in the background to the 5210s as the data ages. Key data (indexes) are written to the 9300, making lookups faster in the second configuration. A fraction of the reads are serviced by the 9300 instead of the 5210s (depending on the query distribution and age of the data being read).

Additionally, by reducing the number of writes to the 5210s, even the reads that are serviced by the 5210s suffer less contention from ongoing writes, so tail read latencies are lower. The insert/update latencies are not pictured as they are similar in the two configurations during the run phase. 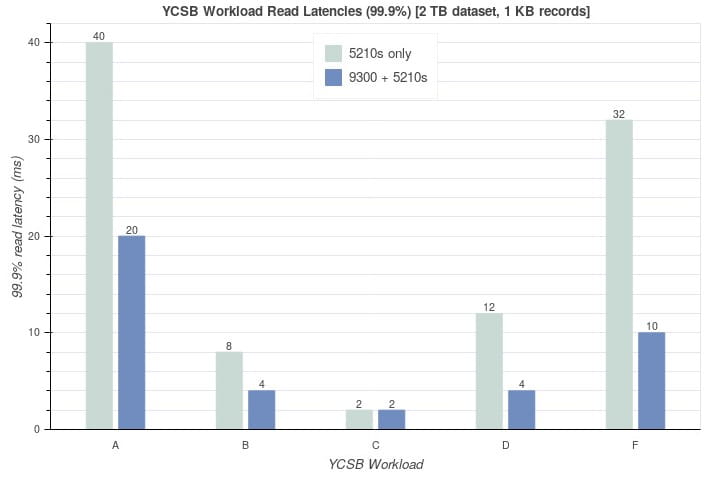 As part of future work, we are looking to broaden specific aspects of the HSE API to enhance its use, like custom media class policies that give the application more control. For example, if the application creates a key-value store (KVS, the equivalent of a table in a relational database) that will be used only for indexing, it can specify that the particular KVS should use a staging media class to speed up lookups. If the size of the indexing KVS grows too large to be accommodated on the staging device, the application can specify a policy that uses staging media but falls back to capacity media. We may also introduce predefined media class policy templates and extend the HSE API to allow an application to use them based on its needs. Be sure to stay in touch for potential developments.

Neelima Premsankar is a storage software engineer on Micron's HSE project. She has previously worked on firmware for data center solid-state drives and network drivers. She enjoys lifting heavy things and putting them down for fun (powerlifting).