Millions of IOPS from a Networked File System Using Weka™

How do we share the performance of modern NVMe™ drives across a data center? There are many competing answers to that question and many companies with exciting solutions.

The right solution depends on the needs of the application in use. The simplest way to share data across servers and applications is to load it on a remote file system. File-based solutions such as NFS and Windows SMB are ubiquitous because of their ease of use, but they aren’t known to be particularly performant. What if you need remote file-system storage and ultra-high performance? Many high-value, file-system-based workloads, like artificial intelligence training and inference, can benefit from high-performance file storage. That’s where Weka™ comes in.

My team at the Micron Solutions Engineering Lab recently completed a proof of concept using Weka to share a pool of our mainstream Micron 7300 PRO with NVMe SSDs. The results — millions of IOPS from a file system — are exciting to consider.

Weka has built a high-performance, parallel, shared file system called WekaFS. According to Weka, a deployment typically runs with a minimum of eight nodes in production environments, but it can run with as few as six nodes if the user does not need virtual spare capacity for a node rebuild.

Here is the configuration we use in our testing (Figure 1): 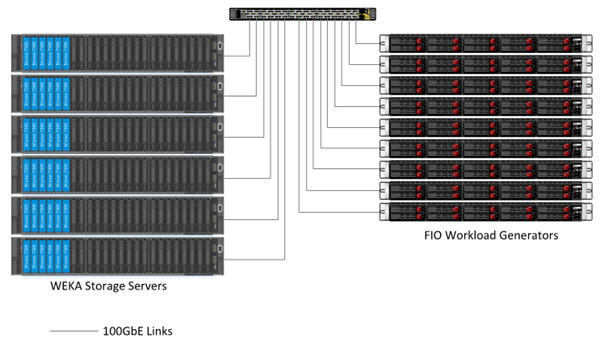 We use the Micron 7300 PRO 7.68TB SSD for this test due to its high capacity and compelling performance (Table 1).

Installation and configuration of Weka is straightforward, enabling us to provision this system quickly. For those who need help during installation, Weka has a great support team.

We conduct all tests using nine client nodes (each node running eight fio execution jobs), with each client targeting separate file folders on the shared file system. For each workload, we increase queue depth (QD) until we determine maximum performance levels. We configure Weka to use 19 CPU cores, with six of those cores dedicated to managing I/O to the six data drives in each Weka data node. 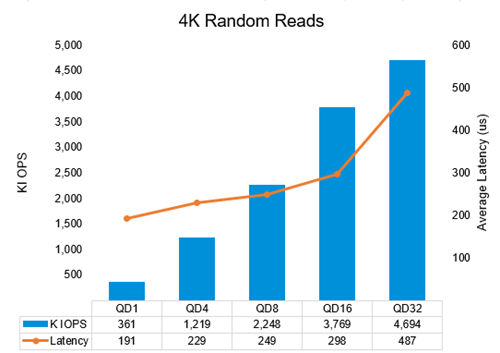 Using 100% 4KB random reads, we see a consistent increase of performance as queue depth increases. At QD32, maximum attained performance is achieved at over 4.6 million IOPS, while average latency increases to 487 µs, a 63% increase over QD16 (Figure 2). 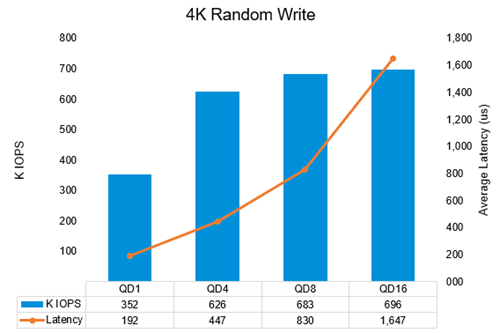 In our experience, achieving submillisecond latencies for 4KB random writes to a remote file system at this level of performance is impressive. It is important to note that write performance is heavily influenced by the number of deployed data nodes. Using more nodes increases overall write performance.

Our next series of tests focus on large block — 128KB — sequential workloads. Large-block I/O testing attempts to simulate use cases such as video streaming, database decision support systems, or big data analytics workloads. This type of workload test measures the rate of data throughput in gigabytes per second (GB/s).

First, we test 128KB sequential 100% reads across a range of queue depths. Our maximum performance is reached at QD16, hitting 62 GB/s at 2.3 ms average latency (Figure 5). 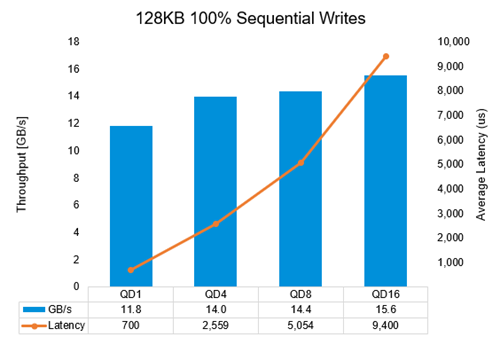 Our test shows that 100% 128KB sequential write workloads also reach a maximum throughput at QD16. But like the 128KB sequential read workload, the QD16 write performance reflects an increase in latency relative to QD8, in this case, approximately 86% higher (Figure 6).

Our testing shows that it’s possible to achieve impressive performance using Weka. Micron NVMe SSDs, such as the Micron 7300, can reach high levels of performance in an easy-to-manage file-system solution. Generating millions of IOPS and GB/s of throughput from a software-defined solution that also provides data protection, Weka pushes the boundaries of high-performance file storage.

Micron’s 7300 SSD with NVMe offers great performance that you expect from NVMe with the cost profile and power consumption typically seen in SATA solutions. These factors make the 7300 the go-to drive for broad deployment scenarios such as file-based storage infrastructures offered by Weka.

To learn more about Micron NVMe SSDs like the Micron 7300, visit micron.com/nvme.

Also, stay up to date on future discussions about using SSDs in data center solutions, like those offered by Weka, by following us on Twitter and connecting with us on LinkedIn. 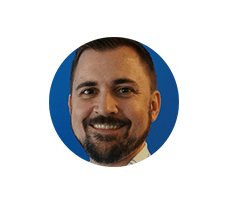