Tech Camp From an Intern’s View: My Virtual Experience as a Mentor

Because of COVID-19 restrictions, Micron was unable to hold its annual in-person Chip Camps for middle schoolers, focusing on science and technology. Instead, Micron offered four online Tech Camps. Three of these three-day camps ran in June, with a fourth camp designed specifically for underprivileged or underrepresented children added in July. Several Micron summer interns served as mentors to campers and helped lead activities. To honor our interns and their hard work, we are featuring a blog written by one of our interns, Victor Rodriguez-Toro.

Summer 2020 has been different from what I imagined. The COVID‑19 crisis and Black Lives Matter protests have changed our lives and will shape the future of our society. On the personal side, my summer internship at Micron was moved to a virtual environment. Although I was anxious, I was excited to be able to work as a quality and reliability intern at Micron, yet I was concerned about the experiences to come. At this point, I couldn’t imagine mentoring about 20 middle schoolers from across the U.S. in virtual activities in science, technology, engineering and math (STEM).

The invitation to be a mentor at Tech Camp was one of the first messages waiting in my Micron email inbox. (Thank you to Jordan Atnip, Micron’s university recruiter and 2020 internship program manager!) I found the opportunity to mentor middle schoolers on STEM activities and to motivate the new generations of STEM professionals appealing. This was the first time that Micron had its annual STEM camp through Zoom, so it would be a great way to experience what could be a “new normal” in our daily lives. It would also show me the activities that Micron develops beyond fabricating technology memories with the highest-quality standards.

After being trained by Laurie Anderson and Cathy Ammirati of Micron’s STEM Education Outreach team, I felt ready to guide some of the campers through the STEM experiences planned for the first day. We had more than 40 campers the first day, and some of them were joining from outside Boise, Idaho, where Micron headquarters are located.

The first day started with the inspiring words from Micron’s president and CEO, Sanjay Mehrotra, and then the campers were introduced to the key steps in processing silicon wafers, including aspects on photolithography, etching and implanting.

After this, groups of four to six campers were assigned to Zoom breakout rooms to work with a PVC disk to emulate a silicon wafer and other elements (using paper, glitter, Play-Doh and other supplies in the kits that had been shipped to campers and mentors). These breakouts illustrated the processing steps involved in the fabrication of memories. Campers obtained nice patterns while also having tons of fun.

Another hands-on activity was informative, even for me. Campers were introduced to Micron’s market segments, including mobile (smartphones, smart watches), client (desktop computers, smart TVs), automotive (in-car entertainment), industrial (self-driving cars and trains) and enterprise (cloud computing). They also learned about the different challenges of each segment (such as size, cost, performance, speed and reliability).

They were then challenged to design solid-state drives (SSD) with different specification criteria for different market segments. Parts of the SSD were represented by Lego pieces, and campers were given a maximum budget for the selection of components. I worked with a five-camper team, with each of the campers having a specific role (marketing, architect, procurement, board design and quality assurance). It was great to see my internship role reflected in this activity. The campers on my team were enthusiastic and suggested going for a 3D approach in the design, one of the enabling innovations at Micron in its products. The campers’ creativity was impressive.

After learning about silicon processing, SSDs, programming and binary systems, campers were ready to do some engineering. The first activity was to build a simple flashlight circuit. With elements such as a battery, clips, copper tapes, simple switches and LEDs, campers learned about the minimum elements required to build a simple circuit.

The “aha moment” on campers’ faces when they saw the LED turning on is something I will remember for the rest of my career. Hopefully, it will also be the first step toward future technology and memory innovation among those who participated in Tech Camp.

Throughout the three days, the campers had been building their knowledge and skills. So the last Tech Camp activity was the most challenging one. They were asked to work in teams to build a motorized drawing toy. Taking advantage of their previous experience with electric circuits, they were each provided a DC motor, cables, a battery, a disposable cup and a few markers. Campers worked hard and came up with amazing designs.

During the three weeks of Tech Camp in June 2020, 105 campers from eight states (Idaho, Virginia, Utah, California, Minnesota, Florida, Alaska and Texas) participated. Micron volunteers were also involved, including interns from across the U.S. According to surveys given to campers, 95% were more interested in STEM careers after attending Tech Camp. For me, Tech Camp was a great opportunity to learn more about Micron and connect with Micron professionals.

As a Latino in STEM, I was also pleased to participate in the final week of Tech Camp, added in July. This week focused on campers from minority populations in the U.S. I am convinced that this beautiful karma of receiving advice and knowledge from many mentors at the high school, bachelor’s, master’s, doctoral and professional levels and paying it forward to new generations is what keeps our society evolving.

Tech Camp has provided a virtual platform driven by Micron’s values (people, costumer focus, innovation, tenacity and collaboration). Hopefully, Tech Camp will be a guiding light in the STEM firmament to create more inclusive, diverse and respectful interacting spaces in the U.S. and the world. 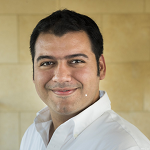 From Cali, Colombia, Victor Rodriguez-Toro received his bachelor’s degree in electronics engineering at Universidad del Valle and then studied nanotechnology at the Technical University of Munich. Back in Colombia, he earned his master’s in electronics engineering, followed by another in electrical and computer engineering at the Georgia Institute of Technology, where he now studies organic photonics and electronics. Victor enjoys visiting national and state parks and dancing salsa, bachata and merengue.

Our employee care program was highly recognized by the Great Place to Work organization.
Read more >

Micron Recognized as an Innovation Leader

For the eighth year, Micron celebrates its inclusion among the Derwent Top 100 Global Innovators.
Read more >
+