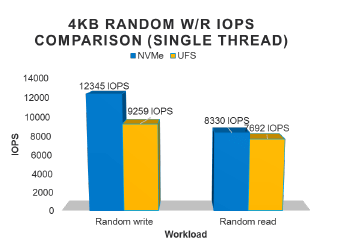 Micron engineers recently compared the differences between UFS and NVMe user-level storage performances. We compare the two by applying the measured system overheads (latencies 1, 2 and 4) to an assumed HW latency, which is assumed to be equivalent for both UFS and NVMe to compare similar devices in terms of performances. This assumption can be made because the system overhead measured in latencies 1, 2 and 4 are independent to the HW latencies, and therefore, can be applied to any HW device. Both UFS and NVMe are assumed to have the same performance characteristics. To compare two equivalent UFS and NVMe devices, we use the measured overheads together with an assumed device speed to calculate expected system performance.

Next, we compared NVMe and UFS system-level performance considering two identical devices (one UFS and one NVMe). For estimation purposes, we assumed the following latencies: 125 usec for 128KB write, 104 usec for 128KB read, 12.5 usec for 4KB write and 16.6 for 4KB read. These numbers correspond to a performance characteristic of a sample 256GB NVMe device, and the numbers used are actual measured values. We could use other numbers and the methodology used can still be applied. We picked a 256GB device for the sake of this study, but other densities could also be used. With higher capacity devices, it is expected that the system overhead impact will be greater and the advantage of NVMe will be even more pronounced.

We applied the measured system overhead numbers to the above specified device characteristics and calculated the expected system performance numbers. We observed an increase of 28% in sequential 128KB write speed and a 15% increase in sequential read speed. In random write, NVMe showed a 30% increase in IOPS over UFS and a 16% increase in random read IOPS.