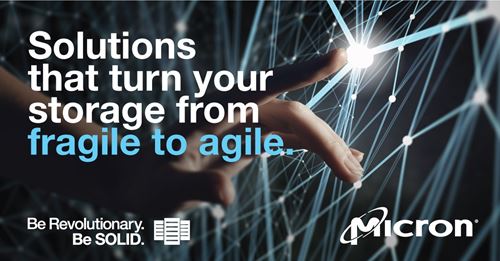 In preparation for this year’s Microsoft Ignite show (Micron is a sponsor of the event), my team has been running tests using the early builds of Microsoft’s Fall Update 2017 of Server Core. In particular, we are very interested in the performance of the Storage Spaces Direct (S2D) functionality and how well it performs with solid-state media such as our Micron 5100 SATA SSDs.

Based on our experience so far – we will re-evaluate once S2D is released later this year – S2D is a real IO performance beast. We released a technical brief that documents our initial results and they were truly unexpected based on our experience with various other hyper-converged software defined storage solutions we have tested. Small block (4KiB), random IO – commonly used to represent enterprise OLTP-like data center applications – showed excellent IO performance across a wide variety of queue depths and across a wide variety of read/write ratios typically used in the benchmarking industry (See chart below). A typical OLTP workload will operate in the 70/30 read/write ratio area and using these parameters we attained well over 600,000 IOPs using 32 SATA SSDs distributed across a 4-node Hyper-V cluster. That number is what was measured at the VM server layer. Our test configuration used triple mirroring as the data protection scheme, so that 600,000 IOPs translates to around 1,000,000 IOPs at the device level1! With 32 SSDs in the cluster, this results in over 31,000 IOPs mixed load per SSD.

If you would like to learn more about our experiences to date with S2D and Micron SSDs, download the technical brief and if you are attending Microsoft Ignite in Orlando, Fla., stop by the Micron booth where we can talk more in-depth about what we have already accomplished and what our plans are for S2D projects soon.

See you at Ignite!