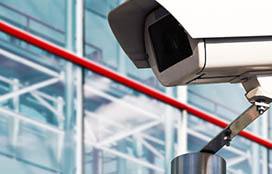 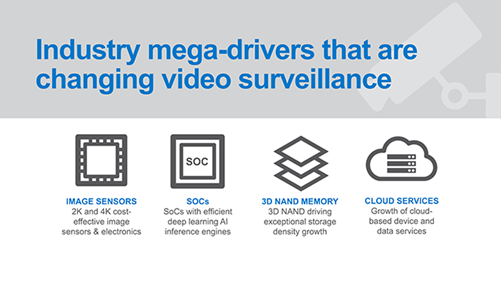 The video monitoring market is growing rapidly worldwide thanks to the almost insatiable demand to have visual sensing of the environments around us — be it in and around our homes, buildings, factories, enterprises or infrastructures. However the number of systems that get deployed and where is more limited by the supply-side economics of video cameras and the complexity of the infrastructure needed to deploy, manage and monitor them.

The last leg of major disruption in the video surveillance industry resulted was enabled by some massive improvements in image sensors and digitalization as well as the pervasive use of Internet Protocol (IP) networks. Let’s discuss some very powerful new technical trends — including the use of 3D NAND-based microSD cards, like those offered by Micron — that are expected to change the shape of the video surveillance industry again and drive the next leg of growth for all its players.

These powerful industry and technology trends — all driven by other markets like mobile, storage, Internet and Internet of Things (IoT) — will significantly benefit the video surveillance industry in years to come. Note how these trends build on each other, enable each other and, hence, are expected to lead to a virtuous cycle of growth and adoption in the video surveillance market.

In 2016, more than 5 billion CMOS image sensors were shipped to customers.1 While most sensors went into mobile phones, other applications like video surveillance can also benefit from these sensors’ economies of scale. Nearly half the shipments contained sensors with resolution of 5 megapixels or more, which enables very high-resolution images.

Video cameras can be designed with higher resolution (5 megapixels and above) than ever before for better intelligence gathering and to drive better video analytics without equivalent increase in cost.

The transition of consumer video from 2k (1080p) to 4k has also increased the adoption and cost-effective availability of the H.265/HEVC class of codecs, which provides significant compression of high-resolution video for storage and transmission.

Many camera OEMs are adopting advanced compression and dynamic bitrate techniques that provide even better compression than H.265 for video surveillance use cases and reduce the size of video that needs to be stored and/or transmitted.

Surveillance cameras have supported microSD card slots for some time now, but they have been used sparingly due to limitations of previous-generation consumer-grade cards, both from a reliability and density perspective. Micron’s new industrial microSD cards for video surveillance edge storage will give system designers unprecedented freedom in designing and cost-optimizing large distributed surveillance systems. These microSD cards, with extremely high density and reliable data storage at the silicon level, make it possible for the first time to store many days of video in the camera itself.

Broadly speaking, the cost of image and pattern recognition-based analytics has been decreasing exponentially. While drivers of this reduction are as varied as social media and internet video to medicine and autonomous cars, nearly every industry, including video surveillance, is benefiting from the availability and maturity of a wide range of deep-learning frameworks, algorithms and semiconductor system-on-chip (SoC) integrated circuits (ICs) designed for efficient and cost-effective implementation of advanced video analytics.

Human monitoring of video is expensive, error-prone and not scalable. Instead of bringing high-resolution video to the central network video recorder (NVR) or servers, which forces users to deal with cost of bandwidth and central storage, cameras can now perform most of the video analysis, using centralized capabilities only for more advanced functions. This means users can get advanced video analytics in the camera, enabling better insights, decisions and outcomes at the source itself.

Thanks to the IoT, sensors and smart devices are being deployed across many verticals like smart cities, transportation infrastructure, factories, enterprises and homes. But scale and manageability requirements of the IoT is driving a shift to cloud-based device deployment and management models, where devices can be provisioned, authorized and managed directly from the cloud without need for separate physical networks and intermediate equipment.

Many use cases will benefit from the ease and cost effectiveness of a direct-to-cloud deployment model for video cameras, and the infrastructure and tools required are maturing in support of IoT deployments. On the do-it-yourself (DIY) end of the consumer market, the benefits of this model have led to accelerated adoption of devices like Google® Dropcam® and Netgear® Arlo™. But now with the adoption of edge storage and/or increased edge intelligence in the camera, professional-grade surveillance will significantly benefit from this model as well, while maintaining a professional class of service and service-level agreements (SLAs) with reduced total cost of ownership. While consumer-grade devices work on public clouds, professional-grade deployments may use a combination of private and public cloud to benefit from the overall ease and cost benefits of the cloud.

Getting to the Edge With Micron

With our leadership in 3D NAND technology, Micron is at the center of enabling the use of edge storage in video surveillance. The many benefits to using edge storage in the camera are well documented in the industry, including in Micron’s Innovative Edge Storage Solutions for the Video Surveillance Industry technical brief.

On Oct. 31, 2017,  Micron announced an extension of our industrial microSD cards family with the addition of new 3D NAND-based 128GB and 256GB densities. These products can help move the industry further down the path to where edge storage in the camera can become the primary video storage or at least be a strong part of hybrid deployments where edge storage is used in conjunction with traditional NVRs, which significantly reduces bandwidth, storage and maintenance costs and increases deployment flexibility with cloud-based deployments.

The size of actual video created in a specific deployment is highly variable. OEMs and system integrators have a lot of tools to manage the size of data — starting with camera resolution, choice of video compression codec used, frames per second, variable bitrates, hours of recording needed based on situation, and so on. The number of recording days to be kept for evidence management also varies based on country or region legal requirements and type of use case and, hence, the SLA between the system integrator and end customer. The chart below shows the days of edge storage possible in a given-sized microSD card based on a 24x7 continuous and fixed bitrate recording use case. As shown, these cards can offer many days of storage, giving system integrators a lot of flexibility in their overall system design and how they want to leverage this capability. 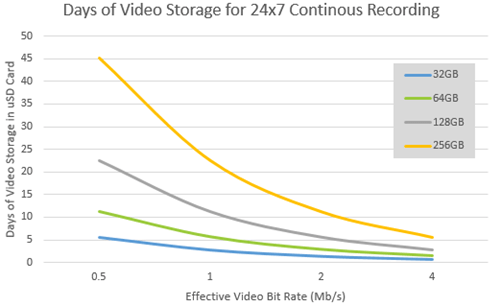 Previously, there were multiple inhibitors to deploying high-resolution cameras for video surveillance:  cost of the camera, cost of bandwidth from camera to the NVR, cost of storage and cost of video analytics on high-resolution videos. Hence, the industry compromised and just lived with grainy, low-quality videos, many times not sufficient to address the very reason why we need video surveillance. With the new lower cost structure of high-resolution camera and electronics, ability to intelligently analyze and store video locally at the edge and bring to the cloud/central stations only relevant data, system integrators can significantly minimize the cost of bandwidth and equipment needed for these deployments without comprising on the high quality of the video. We can finally move past the typical grainy video of the past 20 years. (See What Does a $5 Camera Cost? for an interesting analysis of the true cost of ownership of a $5 video surveillance camera.)

Micron has long been a leader in embedded markets. We focus on developing application-specific products that provide strong value to our customers and end users. Besides bringing new innovative products to market, we invest heavily in enabling the market with the right channel partners to develop and support worldwide markets and customer base.

To meet the unique needs of video surveillance customers faster, including the need for consistent recording performance over years of use, Micron recently announced collaborations with the Shenzhen Security and Protection Industry Association (SSPIA) and China channel partner Jinyu Global. Our collaborations with Jinyu and with the industry association in Shenzhen will also help ensure that Micron is aligned with industry standards while expanding its storage offerings and presence in China and beyond.

Amit is responsible for Segment Marketing for Micron’s Embedded Business Unit. He enjoys understanding upcoming market trends that will shape the industry, and developing Micron’s business strategies in response to those trends. Having done multiple startups in the past, he equally enjoys mentoring startups and budding entrepreneurs on multiple external communities/accelerators.
Continue reading

Mobileye, a leading automotive innovator, achieves a significant milestone on the path to autonomous mobility, thanks in part to Micron memory, storage and related support.
Read more >
+