By Greg Schulz and Doug Rollins

This Server StorageIO™ low-latency learning piece, compliments of Micron Technology, provides guidance pertaining to nonvolatile memory express (NVMe) and how this technology can help you prepare today for the data center of tomorrow. In this piece, we look at why Micron is well-positioned based on its expertise to be your NVMe solid state drive (SSD) provider of choice. View companion pieces in this series, along with other content, at www.micron.com. 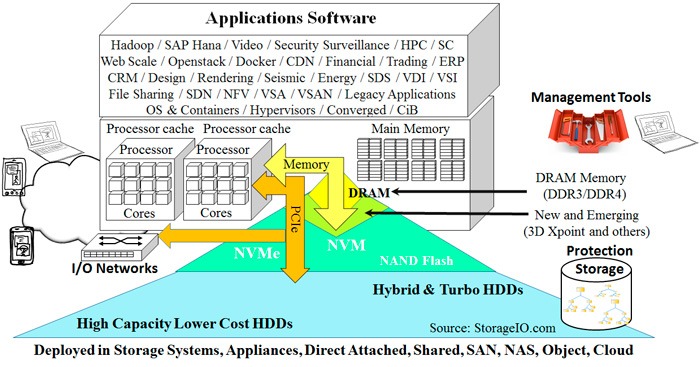 It could be said that the latest generation of applications is too fast for traditional IT architectures. Big data, cloud, analytics, Internet of Things and other technologies had stretched disk-based systems and their associated transmission protocols to a breaking point. Users were left with abundant processing power and applications that could utilize it, but were bottlenecked by the relatively slow pace of hard disk drives (HDDs) during READ and WRITE operations.

Fast access to server and storage memory is enabled using common standard technologies such as PCIe hardware along with protocols and drivers such as SAS, AHCI/SATA and NVMe, among others. NVMe was developed as a standard to reduce latency and provide faster performance for nonvolatile memory-based flash storage.

Micron Technology is on the forefront of these developments. The company has been involved end-to-end in the innovation and production of its DRAM and NAND flash, and is a driving force in associated access interface protocols.

Micron has been a global leader in advanced semiconductor systems for almost 40 years. Its portfolio of high-performance memory technologies includes DRAM, NAND and NOR flash. As well as being the only U.S.-based DRAM manufacturer, Micron leverages an expansive global footprint of fabrication facilities worldwide.

Micron’s nonvolatile memory products are used in SSDs, modules, multichip packages and other systems for consumer, enterprise storage, networking, mobile, embedded and automotive applications. As a result, the company has decades of experience in server/storage I/O technology and interfaces. It understands how they have evolved over time and how they will continue to evolve going forward. It is a proven leader in how to develop, access and utilize these technologies.

3D NAND technology uses floating gate cells to enable the highest-density flash device ever developed — with three times greater capacity than other NAND dies currently in production. 3D NAND arranges flash cells in 32 layers to achieve a 256Gb multilevel cell (MLC) and a 384Gb triple-level cell (TLC) die. As capacity is achieved by stacking cells vertically, the individual cell dimensions can be considerably larger. This breakthrough is expected to increase both performance and endurance and make even TLC designs well-suited for data center storage.

Micron’s leadership in 3D NAND development demonstrates its understanding of the complexity of small-geometry flash. It can deliver enterprise-class flash resiliency and compact form factors that incorporate NVMe technology. With expertise that spans the entire range from protocol to chip and everything in the server/storage I/O stack in between, including flash and controllers, Micron has the know-how to design in improvements from the ground up for next- generation NVMe devices.

Demanding applications and higher tiers of storage are going to gravitate toward NVMe as the storage I/O capabilities of flash and other nonvolatile memory enable modern multi-core processors to complete more useful work in less time.

Micron’s unparalleled expertise in nonvolatile memory and semiconductor systems makes it the ideal partner for any NVMe-related projects. It understands the entire storage-processor-memory ecosystem and how to harness NVMe to build next-generation systems that provide all the processing power, memory and storage that modern, fast-paced applications need. Micron can help you design and fully optimize high-performance, scalable flash-based storage.


All trademarks are the property of their respective companies and owners. The Server and StorageIO (StorageIO) Group makes no expressed or implied warranties in this document relating to the use or operation of the products and techniques described herein. StorageIO in no event shall be liable for any indirect, inconsequential, special, incidental or other damages arising out of or associated with any aspect of this document, its use, reliance upon the information, recommendations, or inadvertent errors contained herein. Information, opinions and recommendations made by StorageIO are based upon public information believed to be accurate, reliable, and subject to change. Refer to StorageIO privacy and Disclosure policy here. This industry trends and perspective white paper is compliments of Micron www.micron.com.