One of the most discussed topics in high-tech is Moore’s law, stating that the number of transistors on an integrated circuit will double every two years, generally doubling performance with it. It’s still astounding that this prediction is generally holding true years after it was formulated in 1965. However, in the rare instance when new CPUs not only beat Moore’s law but fly right past it, the industry stands up and takes notice.

With AMD’s launch of its EPYC 7003 Series processors, we examined which Ceph storage configuration provides the highest business value for its software-defined storage platform. Simply put, what configuration would save cost and power at the node level without compromising performance?

We were skeptical at first as faster compute has not always translated to better business value for customers running data center workloads. When AMD announced the EPYC 7002 processors with 128+ PCIe lanes last year, we were eager to see how applications like Red Hat Ceph Storage running on the new processor would perform, especially when combined with Micron’s 7300 SSDs, which are designed to provide fast, low-latency and consistent performance of NVMe storage for mainstream workloads like Ceph.

Although our prior testing on dual-socket platforms showed amazing results (overview and reference architecture) for some data center customers, single-socket servers may offer a more economical alternative. (Single-socket servers can minimize acquisition costs and power consumption, and reduce rack footprint and energy costs.)

Thus, we built a similar cluster based on single-socket systems (each with a lone 64-core AMD EPYC 7713P processor) with the same number of Micron 7300 SSDs per node.

Again, the results were exceptional: 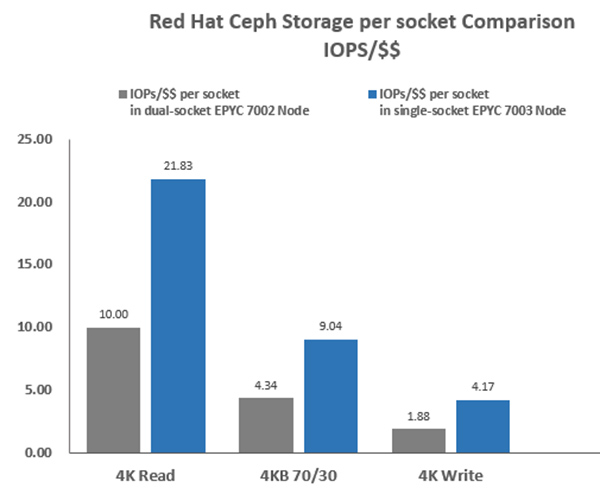 With release of EPYC 7003 processors, AMD appears to have exceeded expectations, at least for Red Hat Ceph Storage small block random I/O. Maybe there is something to that Moore’s law folklore after all.

All information herein is provided on as “AS IS” basis without warranties of any kind, including any implied warranties, warranties of merchantability or warranties of fitness for a particular purpose. Micron, the Micron logo, and all other Micron trademarks are the property of Micron Technology, Inc. The EPYC and AMD are marks, logos and designs of Advanced Micro Devices, In. and are used by permission. All other trademarks are the property of their respective owners. Micron assumes no liability for lost, stolen or corrupted data arising from the use of any Micron product, including those products that incorporate any of the mentioned security features. Products are warranted only to meet Micron’s production data sheet specifications. Products, programs and specifications are subject to change without notice.

1 Micron early testing of prerelease AMD 7003 CPUs on Red Hat Ceph 4.2. Some performance deltas may be attributable to testbed changes, with the majority due to new CPU generation per engineering validation.

Akshay Singh on Building the Fastest Memory on the Planet

Recognizing Transgender People Demonstrates They Are Valued and Respected