An increasing trend of traffic accidents in Japan has been attributed to the elderly (Japan plans new driver's license system for elderly as accidents surge). Experts say that this trend is a natural consequence of the increasing elderly population in Japan, not an indication that the elderly are poorer drivers than other segments of the population. Nevertheless, the news of any deaths attributed to traffic accidents is heartbreaking and warrants discovering how these accidents can be avoided.

People aged 75 or older caused more than double the number of fatal traffic accidents than those younger than them in 2018, a Japanese government report showed Friday, highlighting the road safety challenges the country faces as its population rapidly ages. According to the latest white paper on traffic safety approved by the Japanese government, drivers aged 75 or older caused 8.2 fatal accidents per 100,000 licensed road users in 2018, about 2.4 times the number caused by those aged 74 or younger. (Over-75 drivers cause Japan road deaths at twice rate of younger set) 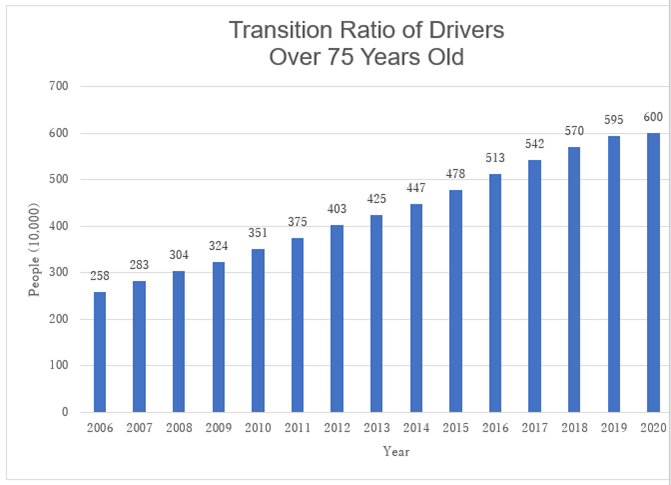 Because of the projected increase in the elderly driving population (shown in the figure above) and the associated potential for accidents, advanced driver-assistant systems (ADAS) will become more common — and more important. Cars with certain ADAS features may also be required before elderly drivers can renew their licenses.

In recent years, an increase in ADAS features has already been seen, with a greater percentage of trucks including safety features such as automatic emergency braking, adaptive cruise control and lane-keeping technologies.

Japanese automobile manufacturers are identifying ways to reduce accidents both inside and outside the vehicle. For example, driver-monitoring systems would not only evaluate a driver for sleepiness but could also assess a driver's health and look for panic caused by unexpected behavior. Additional methods have also been identified:

These functions are typically implemented in the electronic control unit (ECU) and will drive the need for high-bandwidth memory performance, capacity and processing.

Within the ECU, a large amount of video information, high-resolution map information, and three-dimensional data such as lidar is processed. Typically, multiple complex systems on chips are responsible for establishing a real-time computer representation of environmental surroundings, both outside and inside a vehicle. Data rates from camera sensors alone drive the need for high-bandwidth processing. For example, consider the amount of raw data per second of a video shot at 60 frames per second (FPS) using a single 8-megapixel camera:

When processing object recognition with AI on raw moving image data, the data rate is doubled if dual cameras are used. Applying AI to accurately classify and recognize images drives computing performance and associated memory (DRAM) bandwidth to higher than 20GB/second to 50GB/sec in ADAS applications that enable Level 2 (partial automation, requiring the driver to keep a hand on the steering wheel) and Level 3 (conditional automation, where the driver may be required to take over at any time) driving.

For Level 4 (high automation) and Level 5 (full automation) autonomous driving, additional information and subsequent processing are required, necessities that further increase the demand for memory performance to levels that can reach 1 TB/s and beyond.

In the future, the ADAS ECU must also ensure compliance with Automotive Safety Integrity Level (ASIL) standards, with equivalent attention paid to security. These requirements will again drive the demand for both memory performance and capacity. Memory technologies, sometimes overlooked in the discussion of autonomous driving, play a key role in realizing the performance, throughput and low latency necessary to achieve next-level functionality.

As the market leader in automotive memory — with the industry’s broadest portfolio of memory solutions and more than 28 years of commitment — Micron’s technology is helping to enrich life by ushering in the autonomous age. Whether in Japan, China, Europe, the U.S. or anywhere else in the world, Micron is helping to give the elderly the freedom of mobility beyond what they may have today and making the roads safer for everyone.

Mobileye, a leading automotive innovator, achieves a significant milestone on the path to autonomous mobility, thanks in part to Micron memory, storage and related support.
Read more >
+