Micron Is Virtually Unbeatable at VMworld 2018

Micron® Technology at VMworld. It’s a historical event for us – we were the first to demonstrate all-flash vSAN, creating quite a stir at VMworld ’14 – and a must-do commitment on our calendar. Micron offers a wealth of products and acceleration tools for virtualized computing, and reference architectures for VMware solutions in particular. Plus, after our initial 2014 demos, VMware® published Hardware Quick Reference Guides for AF (All Flash) and HY (hybrid flash and rotating media). We continued to add more technical content to help support the ecosystem, enabling customers to optimize for the benefits of flash in their VMWare VSAN solutions.

What a year this was! Our team just came back from five days of innovation with the industry’s top thought leaders, subject-matter experts, and IT professionals. VMworld ’18 celebrated its 15-year anniversary in Las Vegas, where more than 23,000 attendees joined with our Micron experts to network on virtualization and cloud infrastructure innovation. 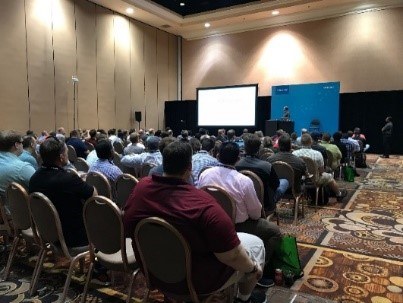 In-booth Talks with Micron and Partners

As always, we had large crowds flowing in and around our booth, especially with Micron’s well-attended theater presentations. These Tech Talks were presented by experts from Dell, IBM Cloud, VMware and of course many our Micron engineers and our product management team members. Micron’s Brett Williams hosted a mini-session on persistent memory in vSphere 6.7. Persistent memory is the fastest DRAM, but with a memory that doesn’t disappear if the power does. Virtualized servers couldn’t take advantage of NVDIMM persistent memory. Until now! VMware now supports this NVDIMM for vSphere 6.7 as well, either in block mode, supporting older applications, or in direct byte mode for newer performance-driven applications. 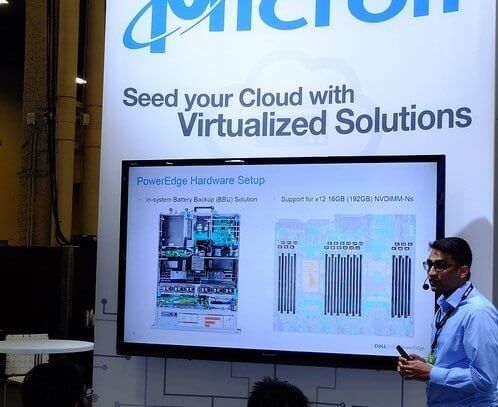 Micron and VMware on Persistent Memory and SSDs

As ecosystem partners, VMware and Micron hosted a joint breakout session on Tuesday that drew more than 150 audience members. “Enhance your vSphere and vSAN implementations with Persistent Memory and SSDs” featured Collin Murphy, storage solutions engineer with Micron, and Sudhir Balasubramanian, staff solution architect - Oracle, with VMware. The question: With SSDs and persistent memory becoming mainstream datacenter technologies, how can you fully take advantage of them for your workloads? Based on extensive testing from the Micron labs, Collin showed the ins and outs of All-Flash vSAN solutions. Sudhir showed how running vSphere 6.7, with persistent memory enabled, accelerates performance on a variety of applications, including business-critical Oracle® workloads.

Micron subject matter experts also spoke with theCUBE at VMworld 2018. Greg Kincade and Eric Caward talked about the tremendous performance and improved densities from flash storage and memory for virtualized environments, like VMware 6.7 using NVMe™ SSDs in the cache layer and SATA SSDs in the capacity layer. Eric announced Micron was releasing our fast, persistent memory 32GB NVDIMM in production in September. This can positively impact endurance as well as lower power and license costs. Watch the video for the exciting details.

Once again, Micron gave out popular scented t-shirts. (I’m told they smell like clouds.) We also gave a 2TB 2.5-inch Crucial® MX500 SSD on Tuesday − Congrats to E. Ick; and be sure to let us know how that SSD works. 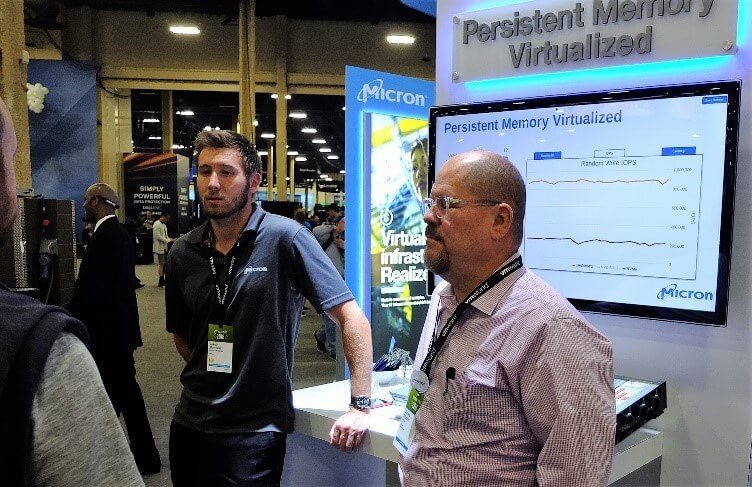 Here’s me enjoying one of the great talks we had at VMworld. We look forward to further discussions with all the contacts we made and refreshed while at the show. What was your favorite part of VMworld ’18?