As the storage market hurtles headlong towards PCIe® NVMe™ drives, we decided to throw the industry a curveball earlier this year and released the world’s first enterprise SATA SSD built on 64-layer 3D NAND technology.

Why would we do that? That’s the question every journalist and analyst asked me on the media tour for our new Micron 5200 series of SSDs: “Why are you releasing new SATA drives?”

My answer: the SATA SSD segment still has a lot of life and this gave us the unique opportunity to differentiate and deliver a winning, best-in-class drive.

Right now, the industry is racing towards NVMe SSDs. As a leader in the industry, we set this course and proudly built the world’s fastest and first 10TB-plus NVMe SSD and contributed to NVMe development as a sponsoring organization since the beginning of the interface.

There’s no question that NVMe is the interface of the future, but when that future will be realized is the question. So while our commitment to innovation in NVMe will continue to lead the industry, we would be remiss to ignore the SATA SSD and the customers that depend on this interface for their storage needs. 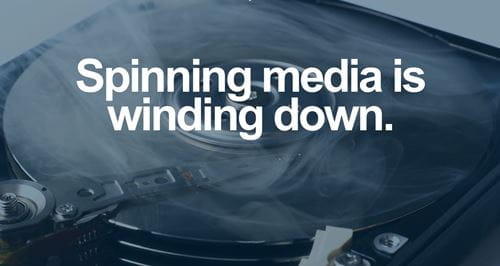 Consider the following from Billy Tallis at AnandTech: “The 5200 announcement may seem to be an uninteresting update to an uninteresting product segment … but demand for SATA SSDs isn't plummeting. In fact, overall volume is still increasing even as SATA market share falls, because the storage industry as a whole is experiencing strong growth.”

Paul Alcorn at Tom’s Hardware put it this way: “While most of the hot development action is happening on the NVMe side, SATA continues to serve the majority of the enterprise.” Here’s more data.

Let’s now layer on two of the most important numbers when it comes to SSDs:

The bottom line: SSDs haven’t hit mainstream adoption yet. Hard drives are still king – but SATA is the one interface that’s best positioned to displace them.

And given that the Micron 5200 SSD leads the read-intensive enterprise SATA competition in capacity, performance, reliability and overall infrastructure value, it’ll be in prime position to do just that.

I admit that as an SSD guy, it’s easy to believe hard drives are dead (and died several years ago). But when I look at the data, I see a very different picture. Despite industry proclamations that SSDs have taken over, the reality is this hasn’t happened yet.

Until adoption accelerates, I like having leading products in both arenas and differentiating. NVMe is the future, but as my old strategy professor advised long ago, knowing what will happen is one thing. Knowing when it will happen is another.

We’re excited about NVMe taking over – but it requires a fundamental platform transition, and that will take time. We’ll be ready for it, but there’s a lot to get excited about till then. Like maybe – finally – dethroning hard drives.

*According to IDC and Micron data