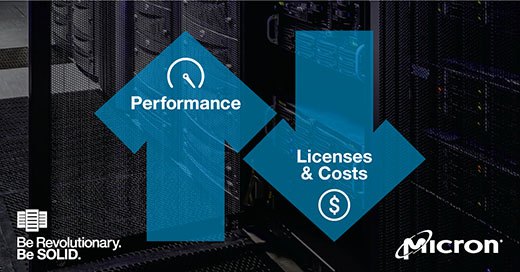 Use fewer licenses by fueling processor cores with DRAM and SSDs 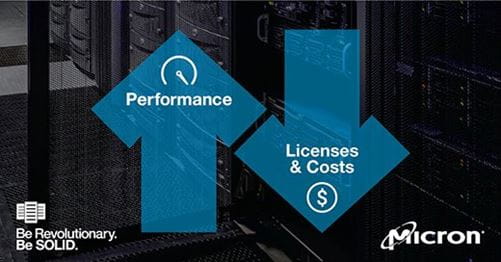 Every year, software license costs consume more and more of your IT budget – but they don’t have to. Here’s how you can save tens of thousands of dollars by fully utilizing your CPU cores and using fewer licenses across your server deployment.

Cutting licenses: A proven way to maximize your IT budget

According to Gartner’s 2018 worldwide IT spend forecast, enterprise software spend is projected to grow 7% versus an overall IT growth rate of just 2.6%.1 For many IT departments, enterprise software spending is the fastest-growing line item in the budget, which makes containing license costs more important than ever. Fortunately, this is easy to do because software licenses are attached to CPU cores, which are fed by memory and storage. The more performance you get out of each processing core, the fewer licenses you need, the lower your costs will be, and the more performance you’ll get out of the apps you’re licensing.

Here are some of the most common enterprise applications used in almost every industry, plus a rundown of license costs, how they’re priced, whether they’re memory and storage dependent, and how you can save.

Click to enlarge
Assumptions: 12 cores per CPU socket, 2 sockets per physical server (every core licensed). The number of CPU cores and sockets in your servers may differ, so your projected costs will differ, too. We based our assumptions on the Dell® PowerEdge® R730xd server because of its popularity, performance, and upgradeability.

How to virtualize enterprise applications and beat the core cost game

Microsoft, Oracle, and others use a core-based licensing model, which enables you to create an unlimited number of virtual machines (VMs) on each CPU you’re licensing. It’s great, but you have to take advantage of it – if you don’t create as many VMs as possible, your money isn’t going as far.

In order to create more VMs, you need more memory because each VM draws upon the same pool of available memory and the virtualization software itself needs RAM to run. On top of that, the apps you’re likely virtualizing are memory-dependent, meaning they’re reliant on active data that lives in memory.

Effective virtualization also requires fast storage because virtualized apps often run out of memory, which triggers the naturally slower performance of storage. The usual drop-off doesn’t have to hurt though if you use solid state drives (SSDs), which allow you to access, load, and save data almost instantly – even when you run out of memory. By accelerating expensive virtualized applications, SSDs help get the most out of your software investment.

Compare costs: software licenses vs. the hardware that powers them

Since all cores running an app must be licensed, the best way to save money is to fully utilize each and every CPU core. If you only use your licensed CPU cores 50% of the time, you’re significantly overpaying for your software (unless low CPU utilization is driven by your workload). Since hardware is the bottleneck for most IT departments, there’s an easy way to save: Fully utilize your cores because they’re what you’re paying for. This is one of the hidden keys to modernizing your data center and cutting costs while also increasing efficiency.

Ensure your CPUs run 24/7 by fueling them with more RAM and fast I/O by swapping out existing hard drives for SSDs. Here’s how the costs break down:

Click to enlarge
How we came up with these numbers: Using the same basic assumptions noted previously, we fully upgraded the memory and storage in a Dell® PowerEdge® R730xd server, which we selected because of its popularity, performance, and upgradeability (2 CPUs with 12 cores each, 24 DIMM slots, 24 storage bays). As of 5 May 2017, the MSRP of a Crucial® 32GB 2400 MT/s DDR4 RDIMM was $395.99, which we multiplied by 24 to simulate a fully populated memory configuration. For SSDs, we took the $1,116.99 MSRP of the 960GB Micron® S630DC 2.5-inch TCG-enabled SAS SSD and multiplied it by 24 to simulate an all-flash storage configuration designed for these types of enterprise applications. While prices often vary, the ratio between software and hardware costs typically doesn’t change much.

The long-term implications of a hardware vs. software investment

When you look at hardware versus software costs, it’s important to remember that licenses hit your budget every year as an operating expense, whereas a hardware upgrade is a one-time, multi-year investment that benefits you for the life of the drive or module.

The bottom line: a hardware upgrade pays for itself

Software licenses aren’t optional, but they don’t have to be treated as fixed costs. By investing a fraction of your budget into Crucial server memory and Micron SSDs to fuel the applications you’re licensing, you can immediately start saving and improve performance. Spend a little now to save a lot every year through increased CPU utilization – and fewer recurring licenses.