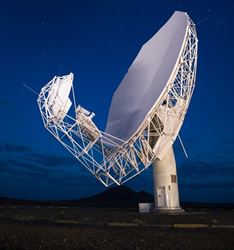 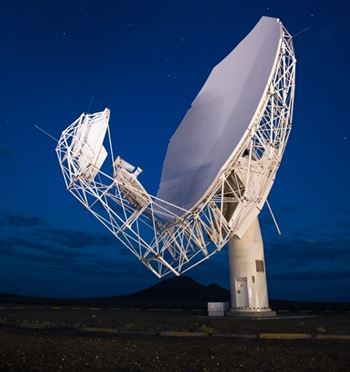 In South Africa’s Karoo, a bold telescope project is underway, one that promises to gather new images from the farthest reaches of space in the hope that we can begin to unravel some of the mysteries of the universe. MeerKAT is a massive radio telescope, that will be made up of 64, 44-foot diameter “receptor” dishes arrayed in the Karoo, where they can get an undisturbed view of the largely unexplored southern sky. The receptors work in collaboration to gather and assemble faint radio signals, creating images of distant galaxies. “Thirty-two of the receptors have come online thus far and the ‘First Light’ images from these have lived up to this promise of discovering more radio galaxies where previously far fewer were observed,” says Dr Fernando Camilo, SKA South Africa’s Chief Scientist.

MeerKAT is a South African-designed “precursor project” and will eventually be integrated into the larger Square Kilometer Array (SKA) initiative, an international effort to build the world’s largest radio telescope—100 times more sensitive than anything in existence today. The scale of the project is enormous, and a huge leap forward in engineering, research, and development. SKA is bringing together some of the world’s best engineers and scientists to realize a breakthrough in human space exploration.

Ahead of this year’s International Supercomputing show in Frankfurt Germany, a group of scientists, engineers, and astronomers met for a virtual roundtable discussion on the initiative.  The talk included the project’s impact on space exploration as well as the computing technology required to make it a reality.

One key area of the discussion centered on the evolving requirement for next generation memory which are playing a key part in the system’s ability to crunch the massive amounts of data being received from the farthest reaches of space.

Learn about the project and the roundtable discussion in this article from HPCWire: SKA Astronomy Project Gets Boost with Hybrid Memory Cube, in SKA South Africa’s newsletter here, and on micron.com.

Krishnan Rajam on Groopview and the Technology of Social Viewing