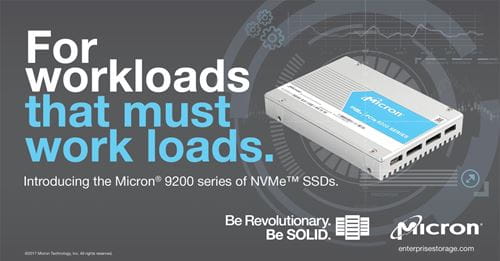 Years ago (more than I care to admit), we faced some serious limitations when we wanted application performance.  We had high RPM hard disk drives (HDDs) – relatively fast, anyway (we thought of 15K RPM HDDs as fast back then, some people still do).  When we needed fast and high capacity, we used a lot of 15K HDDs.

We had very few other options.  Solid-state drives (SSD) were just a handful of GB here and there (really!) and they weren’t mainstream.

A lot has changed since then.  SSDs are becoming mainstream in IT.  When we need incredible random IOPS, now we think SSDs.  When we’re deploying applications that must respond quickly and consistently, we think of SSDs.

With broader NVMe adoption, the difference between legacy and today keeps getting bigger.  The differences are not for the faint of heart.

Head to head comparisons make for fair and honest results

So, first things first, full transparency: We tested three configurations.  They do not have identical capacity nor an identical number of drives.  They’re close, but not identical.

We maybe went a bit overboard with the legacy configuration, using sixteen 15K HDDs.  And maybe we undershot on the NVMe configurations – the first has two 3.8TB Micron 9200 PRO drives and the second has four.

We started by looking at a New Orders Per Minute (NOPM) metric (NOPM is a good measure of business throughput).

After Engineering completed testing and we studied the results, I thought I’d found an error.  I had a hard time telling if it was a reporting error or maybe a testing error.

Well, no.  There’s no mistake.  And yes, we used sixteen HDDs.  The legacy data is there…..it is just really, really hard to see (you have to look super close).

The (very) tall performance bars are the NVMe configs. 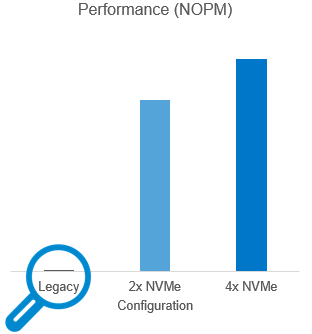 Sort of.  It isn’t the poor spinners’ showing.  We kind of expected that (despite the huge differences in drive count, drive slots occupied, complexity, etc).  The ah-hah moment for me was that I had to really zoom in on the graph to see any legacy data.  “It’s there” our Engineers said, “just look closer!”

You can read the complete technical brief here.

Take a look at our complete lineup of SSDs with NVMe (be sure to look at the MAX, PRO and MAX families) and download the 9200 SSD Product Brief.

Already convinced?  Need to convince others?  Download “The Business Case for NVMe SSDs” to help make your case.

If you have questions about the testing we ran, tweet me @GreyHairStorage or connect with Micron on Twitter @MicronStorage and on LinkedIn.