The reality continuum: AR and VR

Over the last few years, we have seen technology that modifies or influences the physical reality as we know it to enhance our experiences. They accomplish this in different ways and are known by a variety of different names. VR (Virtual Reality) and AR (Augmented Reality) are two of the popular names. As a distinction between the two – VR works by creating virtual (digital) environments and transports the user to these virtual worlds or experiences. By definition, VR cuts out the real environment when the user experiences the virtual world. The HTC Vive, Oculus Rift and Sony PSVR are all great examples of powerful VR headsets that are powered either by standalone gaming computers or consoles. AR on the other hand, augments the real (physical) environment by overlaying it with artificially generated digital images to offer additional contextually-aware information to the user to help the user make better decisions or be better informed. As devices geared to make the physical world richer, AR headsets have see-through glasses, are mobile and generate the digital images right on the headsets. Glasses such as Epson Moverio, Lenovo C200 and the original Google Glass are all good examples of such devices.

More recently, there have been a few other terms that are being introduced into this space – MR (Mixed reality) and XR (Extended Reality). Microsoft has famously positioned its Hololens as a Mixed Reality headset. A MR headset is an advanced AR headset in that it augments a real environment with digital information but are more computational and architecturally complex and allow the user to interact with the digital information or objects like they would in the real world. This makes the enviroment richer and closer to reality and opens up the headsets to unique applications in education, training, and design/research that would otherwise not be possible. Walking around planets in the solar system, visualizing products before building them or remote field traning/suppport are just a few examples of such applications.

At the AWE (Augmented World Expo) in Santa Clara a few weeks ago, I was made aware of another term – XR (Extended Reality). This is the term being used to encompass all these various technologies and represents a future in which the user would be able to choose how much they would want to extend their physical reality into a digital space. Perhaps, with AI (Artificial Intelligence), the devices themselves would adapt from one mode to the other, thereby giving the user most relevant information or experiences at that point in time. 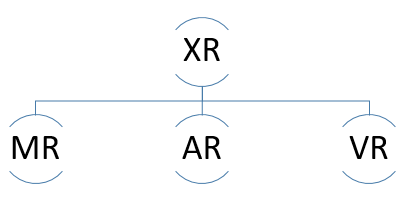 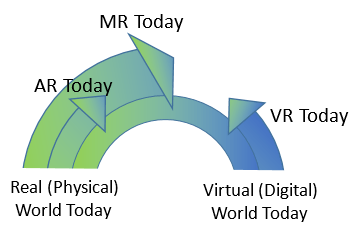 We certainly have disparate devices for VR and AR today but it’s not difficult to foresee a future in which these various technologies converge and devices are able to intelligently transition from one form of reality to the other. The choice may in fact be with the user as they try to accomplish various tasks or experience different things with these devices. In many ways, these headsets are yet to cross the famed chasm of adoption. Improvements in both hardware/software as well as increased content availability helped in the rapid adoption of smartphones around the world. Similar improvements along with technologies such as Machine Learning and Artificial Intelligence will propel XR technologies forward.

Architecturally, many of the early designs of these headsets are based on smartphones but as applications for headsets mature, we are likely to see dedicated hardware and software developed to enhance the user experience. Today’s headset designs use memory densities and packages that are standard and widely available for smartphones. As the need for more power efficient, sleeker, and powerful headsets arises, these traditional memories may not always suffice. As a leader in memory technology, Micron not only excels in today’s cutting edge memory and storage technologies but is also constantly investing and researching new technologies for the future. As the future of our reality as we know it is shaped, Micron will continue to be a part of it both as a contributor and benefactor.

Consumers expect in-vehicle infotainment (IVI) systems to be as responsive as smartphones. Now Micron has introduced the first automotive-qualified portfolio of Universal Flash Storage (UFS) 3.1 memory devices, the same memory smartphone use. This memory meets the rigors of the automotive environment and brings faster performance and improved cost/density.
Read more >

Micron’s DDR5 TEP announced last July to empower an ecosystem around the DDR5 bring-up has grown to 250+ members from 100+ companies. Leaders in areas such as ecosystem & and enablement, system integration and architecture, CPU and ASIC design are working to ensure a smooth transition to DDR5.
Read more >
+